The days of affordable rapid prototyping and instantaneous production are upon us, but how have they changed the manufacturing industry as a whole?

Initial hype around the 3D printing industry had everyone believing that they would be able to print whatever they want in their own home. While this is true, it isn’t where 3D printing shines. Don’t get me wrong, 3D printing has revolutionized the backyard engineering and rapid prototyping worlds, even proving helpful to astronauts on the ISS. All of these advancements are really only afterthoughts when we look at the main goal of 3D printing: creating products without limitations, quickly and easily.

Looking first at the personal and small-scale manufacturing industry, 3D technologies have completely changed the field. For a price that grows more affordable by the day, engineers are able to rapidly prototype parts in hours. Generally, plastic filament like ABS or PLA is used in these smaller printers, which meets the needs of most small-scale manufacturing. The machines are by no means fast, but they are efficient, easy to use, and accurate. In terms of industry shift as a whole, 3D printing has infiltrated almost every workshop across the world, provided the workspaces have the monetary ability to acquire a printer. 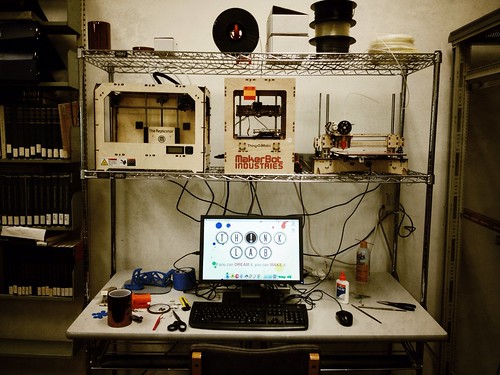 The other subset of manufacturing plays an even greater role in world economy and large-scale engineering. As costs have dropped for larger scale 3D printing machines, many manufacturing companies have begun to produce products with various additive techniques. While there has been a shift of some products being produced through 3D printing, the greater impact lies in the potential of the technology. Traditional production techniques rely on subtractive processes that produce a lot of scrap, which increases costs for production. 3D printing, on the other hand, is an additive process, so only the material needed for a part is used, allowing for greater efficiency and even precision.

There really hasn’t been a large shift in the manufacturing industry towards 3D printing, but the theory behind the improvement of the technology poses a great potential to the industry. Additive technology isn’t lacking in applicable examples of applied production, as there have already been 3D printed cars, houses, bolts, you name it. The only hurdle that keeps 3D printing from being used on a daily basis for these outlets lies in the issues most newer technologies have: cost, speed, and design ability.

Change is still occurring, and the potential for 3D printing to shift the manufacturing industry to a fully customizable practice is growing at a rapid pace.

This post was originally published on Manufacturing Lounge. You can read the original here.