We made the following improvements to BIM 360 Field:

Thank you for all the helpful feedback on our home page beta. We’ve now extended this design to the rest of the product.

We’re introducing a clean new look and feel, consistent with other BIM 360 products like BIM 360 Glue. We’ve streamlined our main controls so the dashboards have more space. And modern web technologies make the layout look great on a variety of screen sizes and devices.

All of the great features you’re used to will be there (but they might be in a different spot).

Notably:
Here’s what we’ve added in this update: 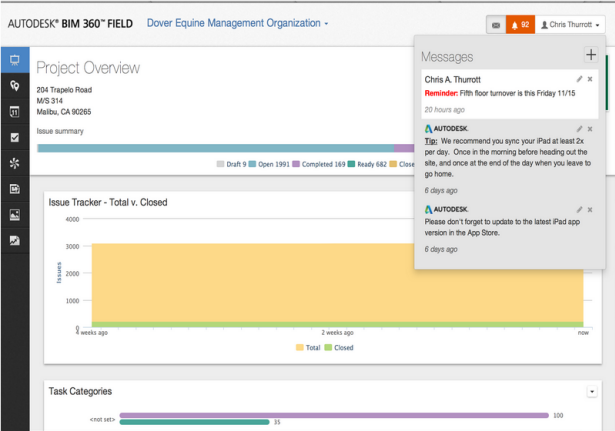 The Average Issue Response Time and Unresolved Issues dashboards now allow you to sort your results, so you can show the 5 longest times or the 5 shortest. 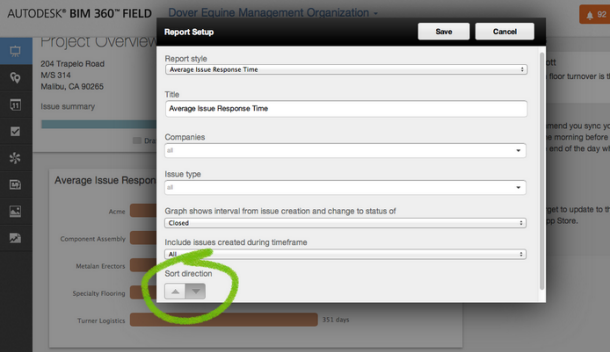 We’re excited to show you a preview of our new home page design!

You can start using it now by clicking the “Try our new home page beta” link at the top of the page. Don’t worry, you can switch back anytime you want.

We’re Introducing a clean new look and feel, consistent with other BIM 360 products like BIM 360 Glue. We’ve streamlined our main controls so the dashboards have more space. And modern web technologies make the layout look great on a variety of screen sizes and devices.

All of the great features you’re used to will be there (but they might be in a different spot).

We’re not completely done yet – here’s what we’re planning next: 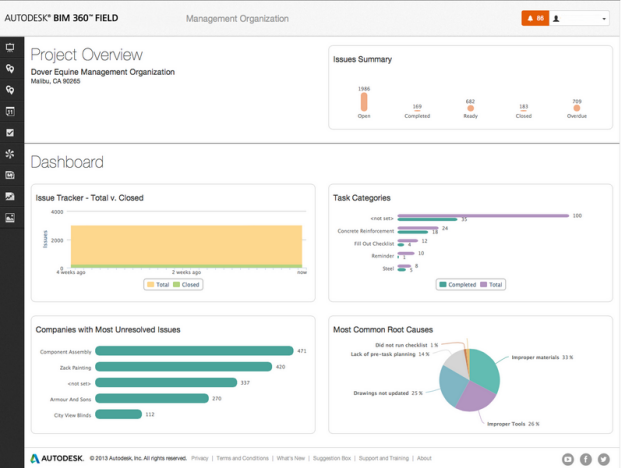 You can now manage companies at account level. Project admins can still add companies to projects, but these will also appear at the account level so they can be centrally managed and re-used across projects (like Users can). Project admins can also import companies from their account’s company list. Account admins can manage the company list and also add custom fields to capture additional data about companies. Note: For this first release, we will show all companies on all of your account’s projects in the company account list. In future releases we will work towards reducing the number of duplicate entries.

You can now choose which issue date you want to filter on (instead of just filtering on date created). This lets you create reports of issues that changed to “Work Completed” (for example) during a given time period.

You can now filter all of our Tasks reports by task type:

Sometimes you’ll take photos on your iPad and accidentally upload some you don’t want to the Photos gallery on the web. While you can delete photos you take on your iPad, sometimes unwanted ones can slip through. If this happens, you can now delete your own photos on the web.

Project admins can delete photos from any user.

We’ve also streamlined the controls a bit, putting the new Delete control into a More Actions menu along with downloading, emailing, and going to the source item (e.g. Go to Issue).

This report shows counts of checklists and observations along with conformance percentage and an optional bar graph. We’ve added additional grouping controls and made this report available to all users. In addition to grouping by business unit, you can now group by project and by checklist template.

This new, more flexible version of the report replaces some older reports that will now be retired:

We’ve reorganized the controls on our list pages for greater consistency and to get less frequently used items out of your way. Adding, editing, removing, and printing items from the list are on the surface, with other controls in a More Actions menu.

We’ve added controls so you can customize the subject and message for your emailed dashboard reports. We’ve also improved styling of the dashboard emails themselves.

You can now group your Issue List reports by Issue Type, so you can break down your issues by source or type of work.

When sketching on attachments in BIM 360 Field for Web, we now support the same sketch tools as seen on iPad and in Pushpins view. The sketch window is also larger, allowing you more room to work.

The improved Sketch is available in Internet Explorer 9 and 10, Firefox, Google Chrome, and other modern browsers. Internet Explorer version 8 does not support the necessary web standards so it will continue to use the older sketch tools.

You can now import barcodes or QR codes associated with your Locations in Setup. Then, when you scan that code on BIM 360 Field for iPad we will show you the list of issues for that location. You can also manually add barcodes by editing locations under Setup.

We’ve updated our BIM Sync plugins to support Navisworks 2014 files. Go to Setup > Equipment > Models and click the Download BIM 360 Field Plugin link to install the updated plugins. To view Navisworks 2014 models on your iPad, update to version 4.1.3 of BIM 360 Field for iPad, available soon in the App Store.

This new report (for account administrators only) shows counts of checklists, observations, and conformance percentage grouped by business unit and checklist template. You can optionally show project and/or checklist item details. An optional bar graph can show the 10 groups with lowest conformance.

We’ve de-cluttered the Reports browser area, making it easier to browse and providing bigger previews so you can find the report you want. Mouse over the previews to see detailed descriptions.

All of your scheduled and saved reports will be preserved and there are no functional changes to the reports themselves (besides other changes described below).

Users (except subcontractors) can now view photos they take or photos they add to issues, checklists, equipment, and tasks. An individual user can only see the photos he or she took or added.

Project admins can still give a user access to ALL project photos by checking the Photo Viewer box when editing a user on the Project Info page under Setup.

We now let you set what time interval to report on in the Issue Trend reports. The graph will always show you the trend over the full date range, but you can choose to show counts in the table by day, by week, by month, or by quarter.

Previously scheduled and saved reports will be unaffected, we will set the interval to “by week” since that is what the table always showed in previous releases.

Available now in the App Store, Version 4.1 brings our Photos feature to BIM 360 Field for iPad:

Improved linking of files to locations in Library

We now allow you to link a file to multiple locations at once in the Library. Click the file, then click the Edit Location Links button.

You can filter the list of locations and check files to link (and uncheck to remove the link). For documents with multiple versions, we link the most recent version.

We’ve improved our notification emails for Tasks and Issues. We now include the item ID in the subject line where possible and streamlined the email text so you can find important information more easily.

Any scheduled or saved reports you previously created will be migrated to the new combined report.

Improved setup for Standard Fields on Checklists and Tasks

We’ve made usability improvements to standard fields setup for Checklists and Tasks. We’ve separated them into a new Standard Fields tab, and now list all available fields so you can more easily hide and show them on the form. Check the “Visible” checkbox to make a field visible and uncheck it to hide the field.

Certain fields are required by the system and cannot be hidden, those are indicated with a “lock” icon.

For account administrators, we’ve added some more improvements to the ones we released last month.