Project admins can now control which roles (Contractor, Architect, etc.) have access to Daily Updates, similar to our other features. You can control this setting in Project Setup. Click Setup > Project Info > Permissions.

As before, each user can only see his/her daily updates but can share updates using the Print Daily Update feature. We do not support Daily Updates access for the Subcontractor role at this time.

With Daily Updates you can report on what’s going on with the project each day. Project members can add and view their own updates, and share printable reports with the project team. Here are the key details: 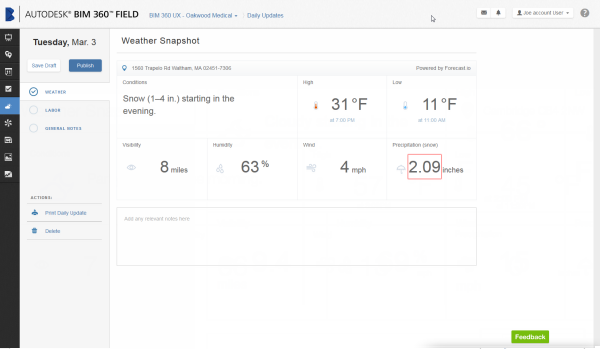 We’re continuing to improve our next-generation Library and add new functions (but we’re not done yet!). Here are the latest additions: 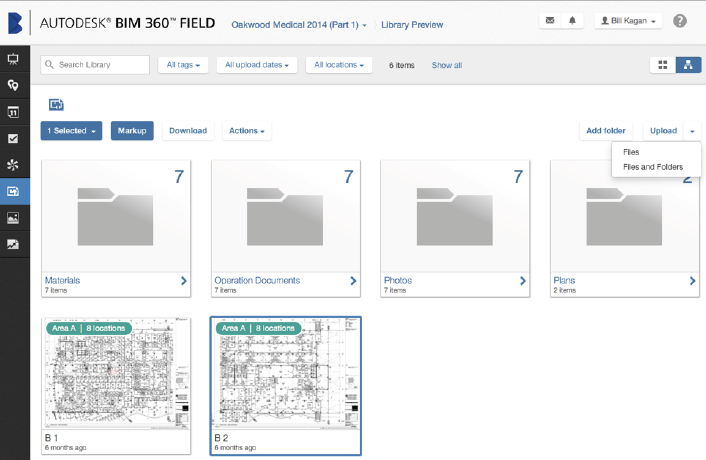 In the Library Preview, we’re continuing to add improvements and features to the markup experience:

You can now follow links between your Library documents for easy navigation between them. For example, link from a floor plan to a detail view. All users can follow links, and document managers can add new ones.

If your PDF documents already contain links from Acrobat® or Bluebeam®, we will import them for use within BIM 360 Field.

You can also follow hyperlinks on your iPad using BIM 360 Field for iPad version 4.6 or higher. 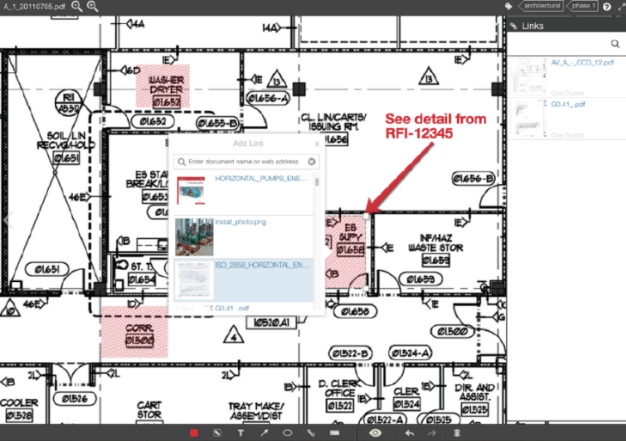 A new version of the BIM 360 Field iPad app is now available on the App Store. This latest version includes the following:

We’re continuing to improve our next-generation Library and add new functions (but we’re not done yet!)

Thanks for all of your feedback so far.

Here’s what we’ve added in this release: 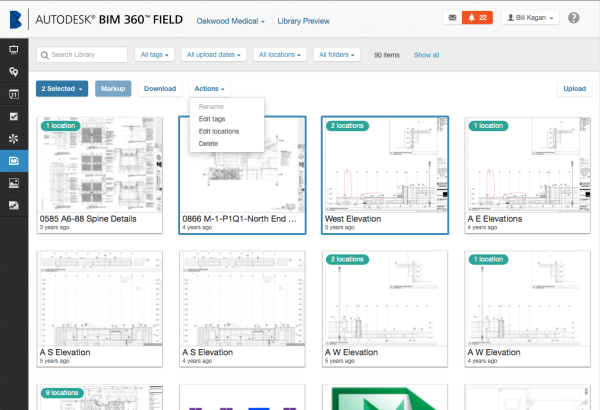 In the Library Preview, we’re continuing to add improvements and features to the markup experience too. You can now hide and show markup using the “eye” icon at lower right so that you can view the original document. You can also view documents full-screen. 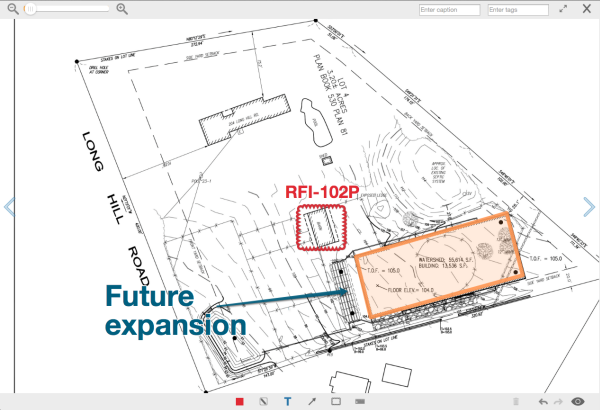 We’ve added a link to BIM 360 Field Help at the upper right corner of all of our pages. You can find information on how to use BIM 360 Field in Help, see the latest updates in What’s New? and share ideas and experiences with other BIM 360 Field users on our Community site. There are also links to contact support and view our About box. 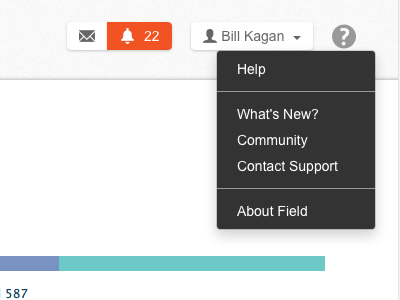 We also made these other improvements

This release includes additional improvements to our next-generation Library and new functions.

Here’s what we’ve added in this release: 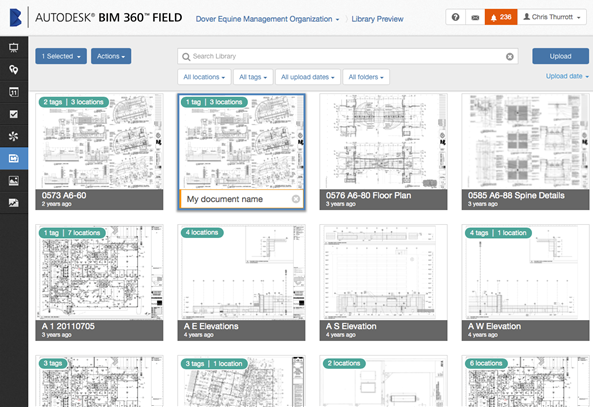 BIM 360 Glue and BIM 360 Field administrators can now share models between Glue and Field to facilitate efficient collaboration among the extended project team.

Models in many different formats from Autodesk® and non-Autodesk products, can be shared across BIM 360 Glue and BIM 360 Field projects.

Before the data can be shared, in Glue, a Glue administrator must set up a BIM model for sharing by creating Equipment Sets for groups of model objects that share properties, such as a pipe or duct type.

After the equipment sets and Field properties are mapped, the team in the field can update the model with installation status and commissioning information. Team members using Glue can view equipment properties that have been added to the model in Field.

BIM 360 Field customers using model integration with Navisworks or Revit, but who aren’t using Glue yet, should contact our support team to see if they’re eligible to get BIM 360 Glue.

If you’re not using models in your BIM 360 Field projects, contact the BIM 360 sales team to learn more about: 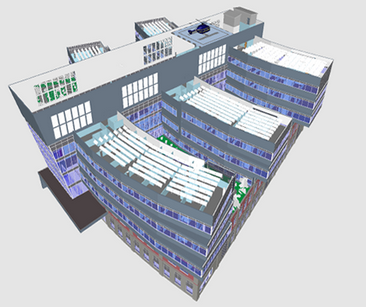 We’re excited to share a preview of our new Library experience. You can try these great features now:

You can switch back to the current Library at any time.

Note: If you choose to send a report to each company for scheduled Issue reports, you will see one log entry for each company that received the report. 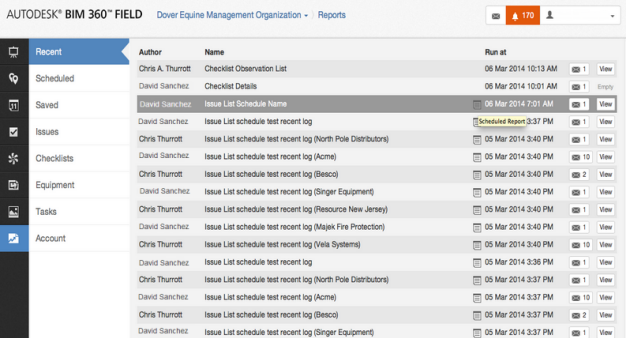 We also made these other improvements:

BIM 360 Field for iPad users will also see these improvements the next time they sync. 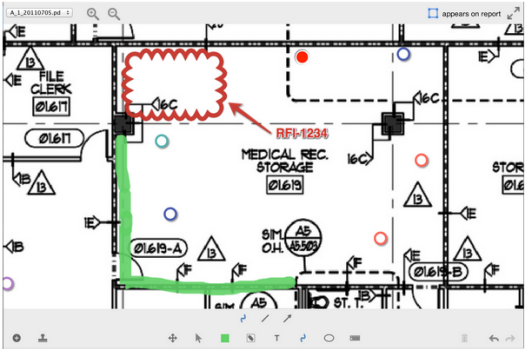 You can now see a history of changes to your Scheduled and Saved reports. You will be able to see the before and after values of each change, along with when it happened and who performed the change. Click the History button below the report description to open the History window. 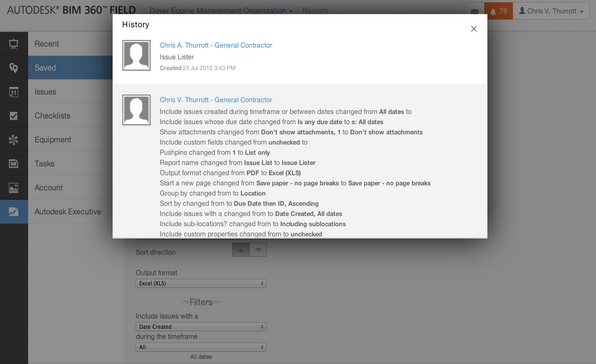 We have also made these other improvements:

We’re excited to announce a new version of our iPad app which has big improvements to the PDF viewing experience. It’s available in the App Store now. Here are the highlights:

PDF documents open quickly, without having to wait for “optimizing for zoom” 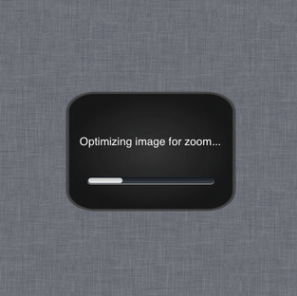 Swipe to change pages, or tap a thumbnail on the bottom to jump to that page. 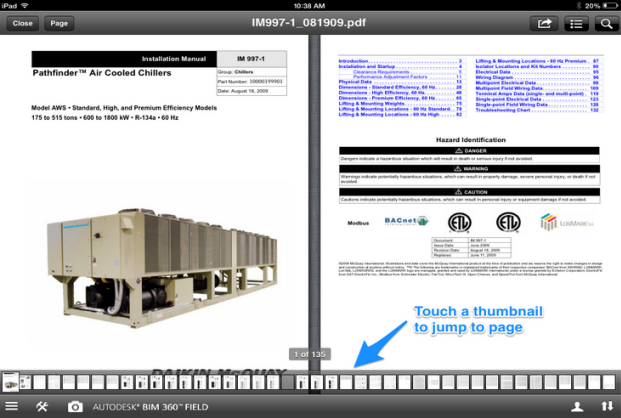 If your PDF includes a table of contents, you can use it to find sections quickly. 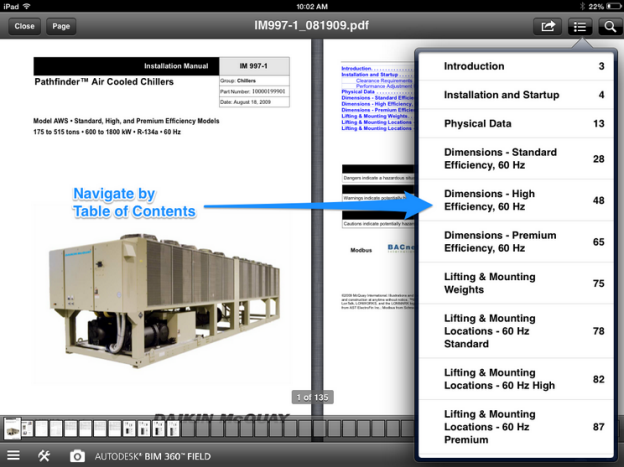 Search for text within PDFs. Type the text you want to find, then tap to go to that page.

To use these features, you need to upgrade your Library documents. The first time you sync each project on your iPad, you’ll see the following message. Tap the Upgrade button to update your documents. This is a one-time process (per project). 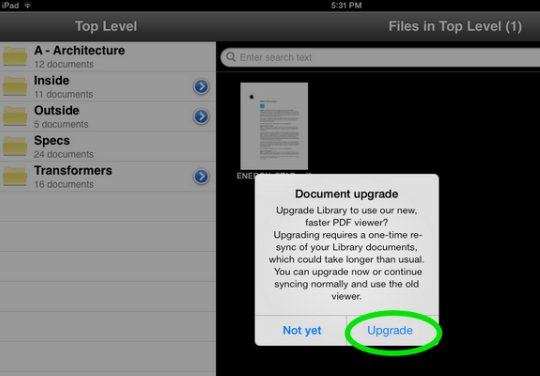 We made the following improvements to BIM 360 Field: