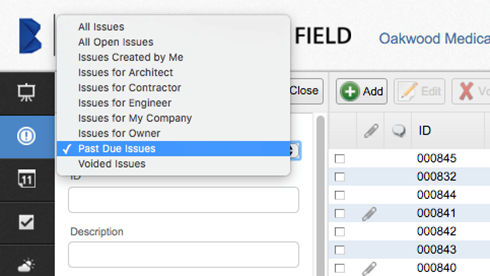 Many of you have asked to make the same filtering functionality available to project and account admins as it is very helpful in when applying role filters to restrict the data that is visible in the report.  With this release, project and account admins will see a new Filter attribute in the report configuration, allowing them to leverage standard and custom role filters that have already been defined for Issues, Checklists, Tasks, and Equipment.

Image below selects a Filter = Issues Created by Me, meaning that any data in the report output will only show issues that I created.

As a reminder, to enable role filters for standard roles, go to Project Admin > Permissions > Enforce Role Filters in Reports.

Prior to this improvement, project admins adding a new company to a project needed to enter the exact initial characters of the company they wanted to add.  The new enhancement allows admins to enter substring of the company name resulting in partial matches.

Image below shows the new results when entering “mason” for a company name.